The in-tool force sensors are easy-to-install piezoelectric sensors. Since 1981, the IMPAX product line (first developed and owned by Nuvatec, Inc. and later owned and further developed by Process Technologies Group, Inc.) has been using the same type of piezo disk sensors that were noted in Nuvatec's US Patent Number 4,481,589, dated November 6, 1984. These sensors are placed as close to the forming forces as possible to attain a good signal, but strategically located to be protected. They are usually placed somewhere in the tooling area or in a carrier that is attached to the tooling or the press. Usually, a pocket is milled out, and the sensor is epoxied into place. One of the unique characteristics of these disk sensors is that their shape can be altered to match the tooling and space requirements. We have cut down their circumference, cut them into strips, and cut them into other patterns.

In the early to mid 1980's, numerous experiments were conducted by Nuvatec, Inc.'s personnel to determine the optimal placement locations for a disk sensor and the best method to permanently secure the disk sensor into a tooling area or a carrier. Initially, the sensors had to be electrically isolated so epoxy was applied on only the bottom of the brass disks to secure them into place. The epoxy served as both the glue and an electrical insulator. The technicians also determined that the mechanical designs of some machines (space requirements) dictated that a pocket be created to accommodate the sensor. A pocket was milled, and the sensor's brass side was directly glued to the bottom of the pocket with epoxy. But it was found that both of the above techniques had drawbacks: Oil or lubrication coming in direct contact with the sensor would affect the sensor signals, and after a while, the sensors could break loose from the metal making them inoperative.

By late 1985, it had been determined that creating a pocket and fully encapsulating the disk sensor with epoxy in that pocket was the best method of permanent attachment for many metal forming applications. When the epoxy dries, the sensor becomes part of the metal structure reacting to both horizontal and vertical force vectors.

The pocket dimensions are always a bit larger than the sensor itself and are milled out. A trace line is usually milled or drilled for the sensor wire exit as well. The following procedure was used and is still used today to glue the sensor permanently into the pocket: A light layer of epoxy is first spread onto the bottom and sides of the pocket. The sensor is then carefully placed into the epoxy. Finally, there is a layer of epoxy put over the sensor completely filling the pocket. It is filed or sanded smooth. Using this technique, the sensors give out excellent signals, are immune to vibration, and are totally encapsulated so no dirt or lubricants will be in contact with them.

Since the mid 1980's, when first encountering a new type of machine or evaluating new applications (nail making, broaching, machining, stamping, forging, extruding), we have used a different technique to attach the sensor. We temporarily secure our disk sensors directly to the metal with a quick set epoxy or glue (Super Glue) spread only on the bottom brass side. For stamping applications, we have attached the disk sensors to machine frames, bolster plates, die shoes, tooling areas, and tool holders. For other applications, we have attached them to machine castings, rods, levers, tools, tool holders, etc. We then use an oscilloscope connected to the sensor to insure that we can get a good signal and observe a change in signal with a true or induced fault. Once this step is completed and our testing successful, our technicians normally mark up drawings to locate the permanent pocket for the disk sensor.

1987 - IMPAX installs an IMPAX 1000 on a Punch Press at Flexible Steel Lacing Company.

1990 - 1991 IMPAX begins working with American National Can Corporation. IMPAX went on to install multiple IMPAX units at various ANCC facilities on conversion presses checking the tab staking and coating thickness with the disk sensors epoxied into the die shoes. Impax also installed IMPAX units on Minster horizontal can presses. The sensors were epoxied into the die block. The ANCC Food Metal & Specialties Division in which some IMPAX units were installed was sold to Silgan Container in 1995. Silgan continued to order IMPAX units after the sale.

1991 - IMPAX installs the IMPAX 1000 with the disk sensor epoxied into the punch holder on a Bruderer press making connectors at Panduit Corporation.

1996 - IMPAX installs the IMPAX 1000 unit on a 75 ton Minster Punch Press at Freeway Corporation. Six (6) sensors were epoxied into the die mounting plate.

From our humble beginnings, we have learned when and how to use the piezoelectric disk sensors and where to install them for obtaining the most optimum signal. We have also expanded our sensor capabilities and now offer various cartridge type sensors as well as strain sensors. From our twenty-five years of experience with monitoring stamping presses, the epoxied piezo disk sensor has been found to be one of the most reliable if not one of the least expensive ways to measure the signal coming from the press.

The pictures below, show a typical in-tool sensor installation, sensors in a stripper plate, an early communication about sensor placement, and the results of a test using the disk sensor: 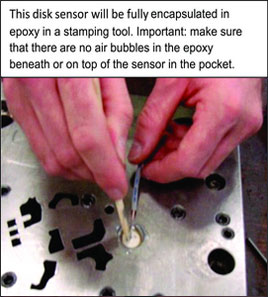 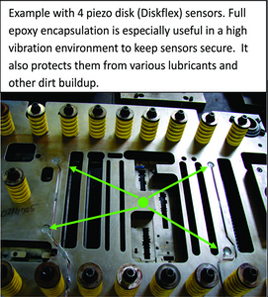 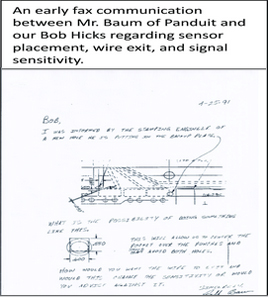 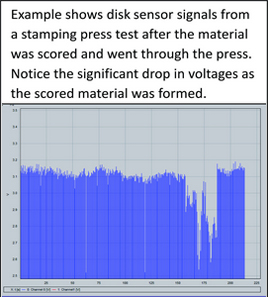 What is Process & Production Monitoring