The safety aspect of threaded fasteners, particularly in automotive and aerospace applications, underlines the importance of strong thread as a matter of life and death. Thread Rolling Departments have become the focus of quality improvement worldwide. IMPAX/SK have been involved in a three-year study conducted under the guidance of the German Fastener Manufacturer's Association and sponsored by the Ministry of Economy of the German state of Northrhine-Westphalia. This study addressed this crucial issue, along with other aspects of improving the thread rolling process. Because of this research, the SKROLLmaster system was developed which now, for the first time, provides the machine operator with objective assistance in performing an optimal setup of thread rolling dies.

Typically, setting up a thread-rolling machine requires a lot of experience and patience on behalf of the machine operator. Even then, the result of this work can only be judged by means of time consuming empirical testing. Time and production pressures can force the operator into less than optimal set-ups that can result in inferior thread quality and costly die wear.

Most industry experts will agree that the thread rolling process itself remains a bit of a mystery. In particular, there are no tools available to analyze the actual rolling process and set-up personnel generally do not have specific guidelines for proper setup procedures. As leading fastener producers are forced to train new operators, it is vital for them to reduce the intuitive aspects of the setup procedure and implement objective and reproducible routines.

Most fasteners are threaded on various flat-die rolling machines (horizontal, inclined, etc.). The headed blanks are rolled between a stationary and a moving die and the thread form is squeezed into the shaft during the rotational movement. 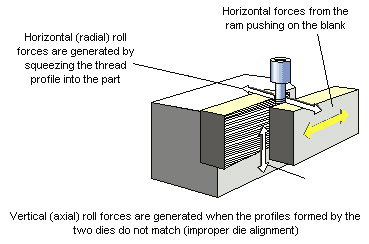 The horizontal, vertical and radial forces in thread rolling

Only precise alignment of the two dies produces good threads. Even a small misalignment can immediately cause thread laps or skidding blanks. Both effects weaken the thread profile, and they are considered serious quality defects. There is only one correct position in flat-die thread rolling process where the two dies should be set against each other. Finding this setting is a demanding task for the operator. The fixed die block is typically flexible enough to be adjusted three dimensionally to find the proper position with the moving die. Unfortunately, this setting flexibility offers a high likelihood of error without the assistance of suitable measuring instruments. Although thread roll process monitors are available, they typically use only one sensor measuring radial roll pressure to detect bad rolls during production. They have offered only limited assistance with optimizing thread roller die alignment.

The German study concluded that it was necessary to improve this standard by applying more sensors to the process to obtain information that is more relevant. Main attention was given to the thread rolling forces:

A new generation of IMPAX/SK piezoelectric sensors can be integrated into the adjusting bolts or directly behind the dies. These sensors are capable of sensing not only the direct (radial and axial) forces but also the indirect effects of horizontal forces whereas the conventional sensing location was position to watch the radial force. 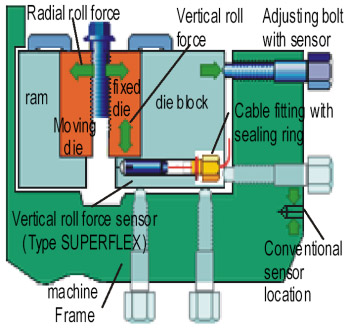 With the expanded number of sensors measuring roll forces in all three axes, the German study documented the force changes for different die setting on different machines.

The study confirmed direct correlations between the measured forces and the respective die adjustments. That confirmation proved that most die settings can be monitored to prevent part skidding, lapping and incorrect die squeeze.

The conventional way to set up a thread roller involves rolling the blank for a half turn, removing the part, and checking die match. If the thread profiles from both dies run into each other, die match is considered good and the operator will start production. The German study revealed, however, that this is only half of the story. Two reasons were cited to show that the static check is insufficient:

The new IMPAX/SK sensors have proven to show significant signal changes when the dies are improperly set. The two vertical sensors under the stationary die react strongly to imperfect die alignment because any misalignment results in upward or downward forces. If die match is perfect, these forces will almost be zero. All test from the study have shown that die setting with minimal vertical forces produced superior thread quality and maximum die life. The visual display of the force signals on the IMPAX/SK monitoring screen assisted the machine setter in finding an optimal die adjustment quickly and efficiently. The signals also identify faulty new die sets so they can now be quickly returned before causing havoc. 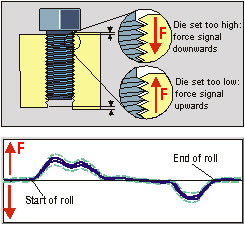 A very appealing aspect of this procedure is that die alignment can actually be checked at production speed, eliminating the previously described imperfections of the conventional method. In almost every case, the operators were able to improve their initial setting considerably by visually observing the vertical force signals. In fact, even experienced setters were surprised when they found that their old half turn check system actually showed "improper alignment" when the machine was set up using vertical force indicators.

A rapid up and down movement of the vertical roll force signal easily identifies skidding parts. This up and down signal reflects the die pressing down and lifting up when the part skids forward and then stops to wait for the moving die to catch up.

If the blank is pushed into the die too strongly or if die gap is too small at the start of the roll, it can be seen as a short drop in the horizontal force curve precisely after the first half turn of the part. This setup up error typically causes a longitudinal seam on the part's shaft and in bad cases, will result in so-called "zipper laps." 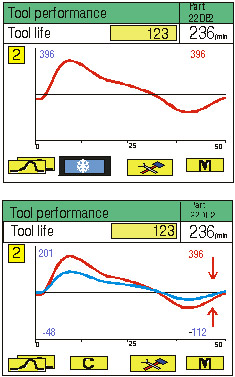 The study confirmed its initial thesis that setting up a thread-rolling machine depends heavily on the personal experience and capability of the individual machine operator. To make things worse, the expert knowledge of older setters is typically not transferred systematically to their younger colleagues. When those experts retire, their knowledge is often lost for good. The solution is an objective and reproducible set-up tool and information system that can be easily used by inexperienced personnel.

This research led to the development of the new SKRollmaster system used to assist operators in setting up thread rolling machines. The objective of this system is to give the operator a three-dimensional view into the rolling process and to provide information on any potential set-up problems. The system can also be used to memorize a limited number of good set-up procedures and to make this expertise available to others when that part is made again.

A completely new family of roller monitors has been developed to include several or all of these capabilities:

A Window View of the Set-Up

Up to four different sensors are typically connected to SKRollmaster system. The roll curves are shown on the large color display, either individually or as a combined view of all four signals to show the entire process.

For a repeat run of a previously memorized job, the operator recalls the target force curves by entering the part number. The display will show a direct comparison of the memorized target curve and the curves that are currently running.

The operator sees immediately where and how his current setting is off target. The expertise of the "SKPartmaster" at each company will be collected systematically and made available to the entire organization. Over time, the SKRollmaster system enhanced with SKPartmaster will help to build an extensive library of knowledge. Even inexperienced operators would be able to set up just like these masters.

Cost pressures and the ever-increasing demand for defect-free threaded products are forcing fastener producers to seek tighter control of their quality and efficiency. The SKRollmaster system for the first time, allows an objective evaluation of the thread rolling process. Like using several magnifying glasses, the measured force signals give a three dimensional look into the process and makes substandard set-ups clearly visible. The thread rolling process has gained an unprecedented transparency and is now capable of reproducing high-quality set-up-procedures.

The study proved that die life increases significantly when set-ups follow recommended procedures. Perfectly aligned dies will not wear out their thread profiles prematurely. For information on the IMPAX/SK Systems with the SKRollmaster and Partmaster software, contact IMPAX/SK Technologies.

Request More Information, or a Quote

What is Process & Production Monitoring